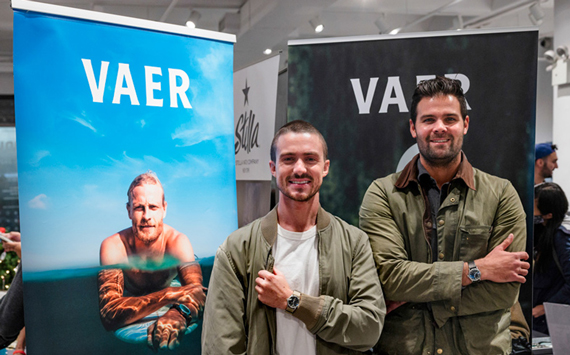 It’s not that they don’t want to. In fact, their designs frequently riff on inside-baseball vintage watches, which you’d think would be a tacit acknowledgement of the HODINKEE audience. It’s that they want to bring more people into this hobby. People who don’t already own a watch. People who look like founders Ryan Torres and Reagan Cook – young, tech savvy, and fashion-forward. But instead of becoming another “lifestyle” watch brand that pays more attention to Instagram influencer marketing campaigns than quality control, they want to get people hooked on classical watch aesthetics. 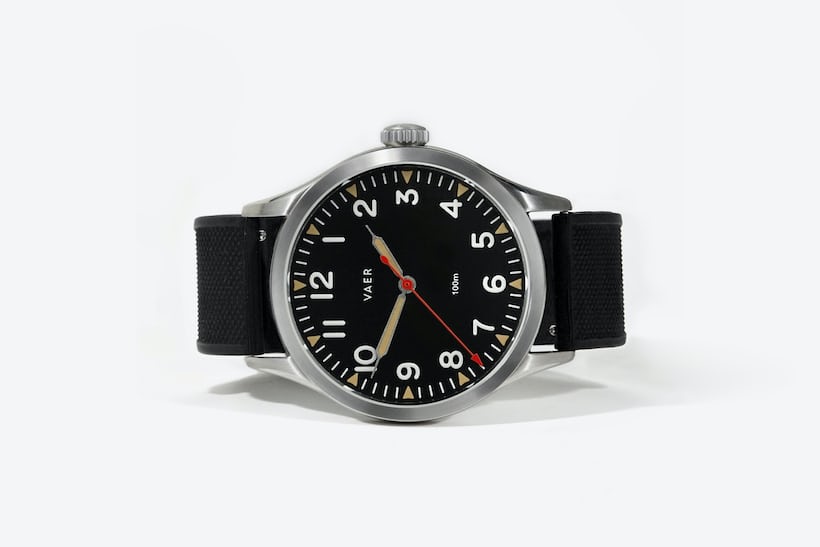 Take, for instance, their most popular watch. The $209 C3 Tradition Black Field Watch – a 36mm, no-date tool watch with a screw-down crown, 100 meters of water resistance, a sapphire crystal, and an American-made quartz movement inside. Assembly is handled in the United States, too, at Fine Timepiece Solutions (FTS), the horological startup out of Fountain Hills, Arizona, that’s begun offering assembly, service, and their own quartz movement, called “Ameriquartz.”

It sure sounds like a creation put together to attract hardcore watch purists, and they won’t stop you from buying one, but their target audience is the rookie.

“There’s a tendency to create watches for the collector – the person who already has 10 watches,” Cook says. “We’re thinking about the customer who is making a single watch purchase, it might even be someone’s first-ever watch. The foundational idea is to create something timeless.”

Torres and Cook were working at the same tech company in the mid-2010s. Torres, California native that he is, got in the habit of surfing in the mornings before heading to the office. But he had a problem. On his post-undergraduate budget, he couldn’t find a watch that could go from the beach to the office. Daniel Wellington and the ilk couldn’t survive the morning’s waves. A G-Shock could handle the surf no problem, but it was too bulky to wear in the office. 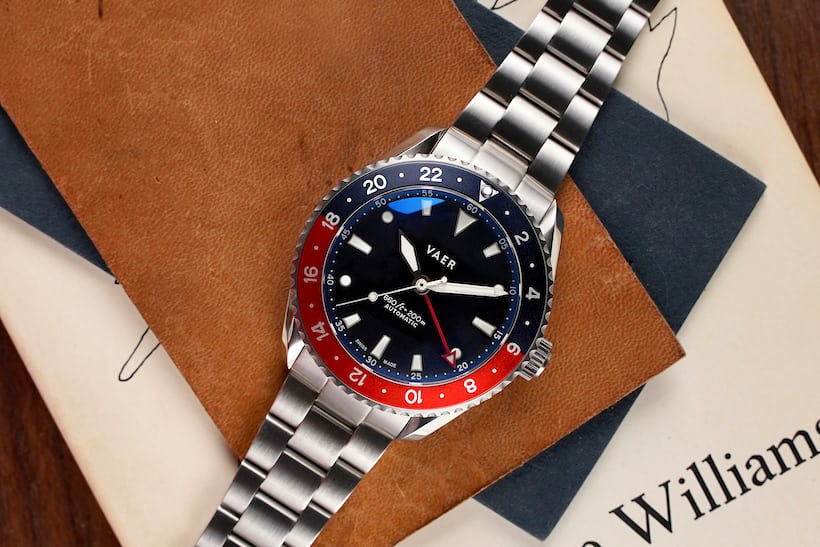 Torres’s first reaction was to sketch some designs out, which he subsequently brought to Cook, who worked as an industrial designer in their company. Was it possible to create a watch that could take a beating, pass muster at the watercooler, and remain affordable? Turns out, it was, and thus, Vaer was born.

10 ATM. Quartz. Sapphire crystal. That’s all Torres and Cook focused on at the beginning. Things that start simple always grow more complicated with time, and the Vaer collection today consists of watches from $159 to $1,200. You can buy an American-assembled quartz watch or a Swiss-made GMT with an ETA movement inside. It’s a broad spectrum that’s meant to offer the consumer a choice for wherever they’re at in their watch-collecting journey. If you buy the quartz field watch at $159, maybe in a year or two you’ll want to upgrade the same design with an automatic movement. 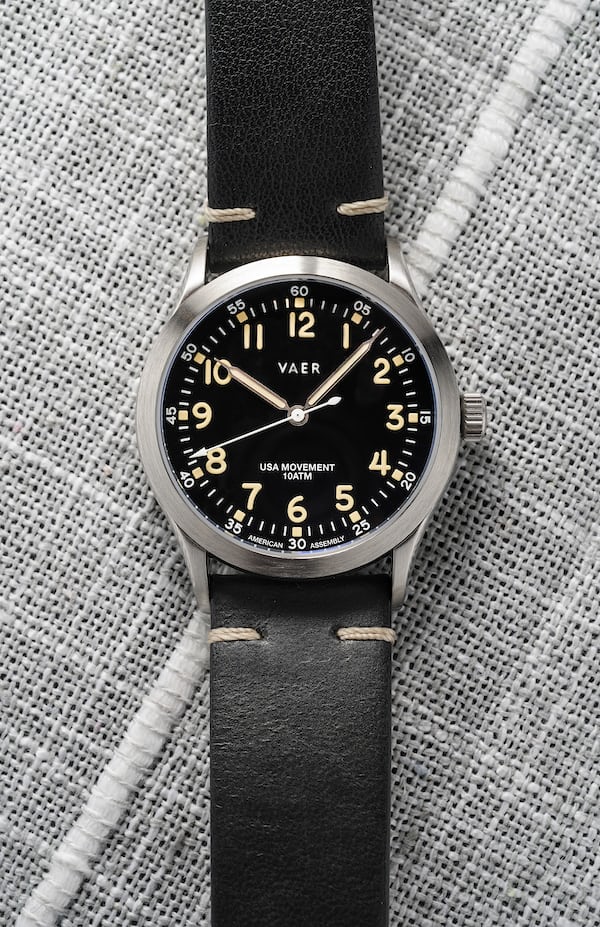 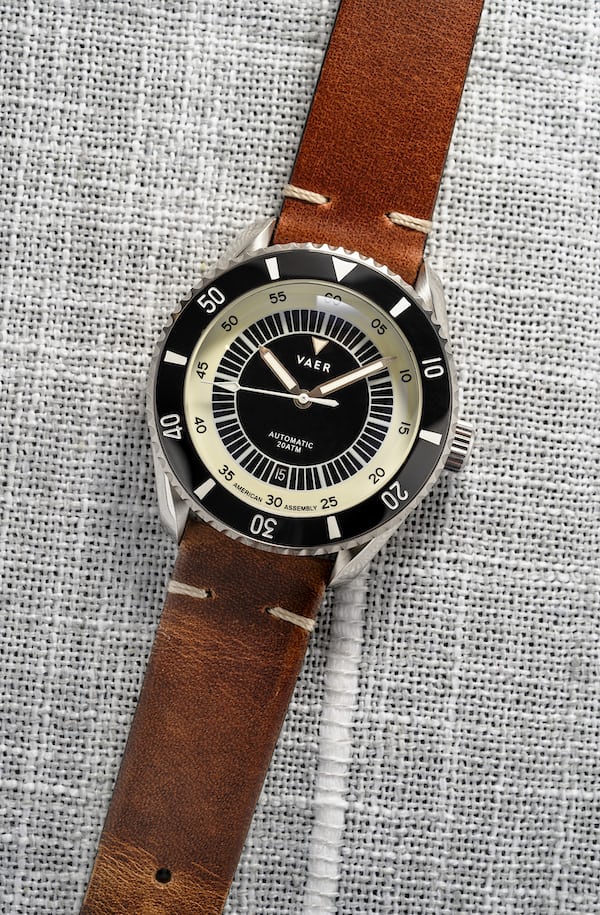 Self-funded since their 2016 launch, Vaer isn’t a get-rich-quick scheme. There’s no plan to sell high to investors or another company once they’ve achieved continued success.

“We started this company with our own savings,” says Cook. “Instead of buying, say, a Submariner, we took our $10,000 and put it into starting Vaer. Watches can be an investment, but we decided to invest in ourselves, instead.”

Why We Love Them

A small-scale, independent watchmaker using a direct-to-consumer model with a promise to “disrupt” the system? Hardly a novel concept today.

But what caught my eye when I met with Vaer during the Windup Watch Fair in New York in October was the forthrightness of the founders. (Also, the quality of the product – more on that, below.) 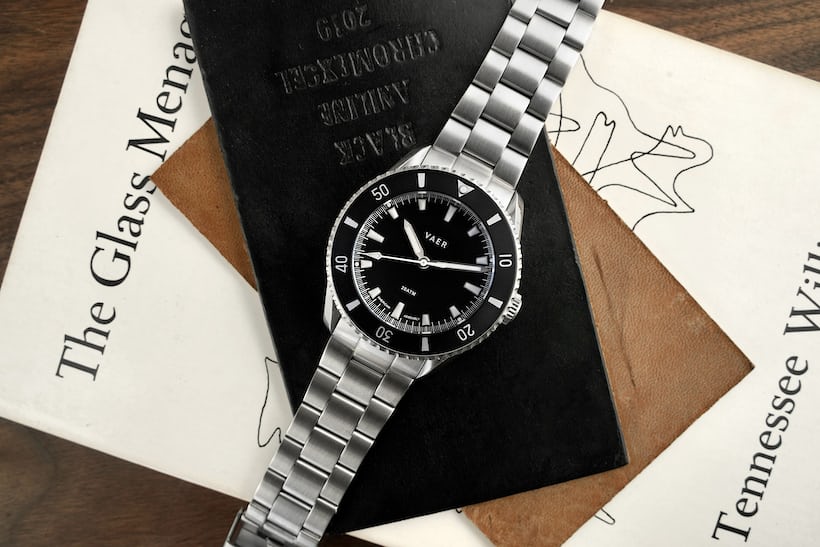 I’ve seen so many young watch companies try to force the issue by attempting to make a watch that they think every watch enthusiast will like. They spend too much time on Instagram and the forums and believe it’s crucial for every watch to conform to some ideal standard. The issue is that they’re speaking to – quite frankly – a pretty small audience in the grand scheme of things. The beauty of the direct-to-consumer model for a young watch company is the ability to control the narrative about your product. But if your product has a built-in limiting factor in its price and appeal, then what’s the point? No amount of storytelling will allow you to scale.

The guys behind Vaer realize this. They offer a broad selection of watches, all riffing on a classic, easy-to-appreciate style that leans on enthusiast elements, and at an approachable price.

Instead of having someone young end up with a flimsy fashion watch or a 44mm+ leviathan leftover from the 2000s, Vaer is guiding people toward the enthusiast language in a way I hadn’t seen before. 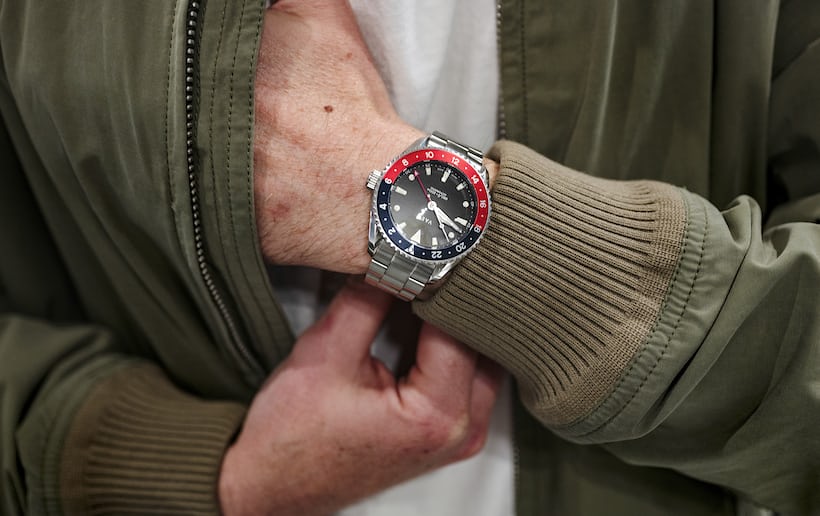 “We’re big advocates for pushing the conversation toward smaller watches, in general,” Cook says. “We want to shift the mindset of buyers from thinking 36mm is too small of a watch. We also don’t say whether quartz or mechanical watches are better. We simply lay out the value of both and let the customer choose. A thousand dollars is a ton of money for most people in this world. So quartz acts as an entry point, an example of why you might want something analog on your wrist. It’s so much easier to test that proposition with a $200 purchase.”

The ability to have two conversations at the same time is difficult for Swiss luxury watch brands with centuries of experience on Vaer. But it’s how they maintain this duality that makes their growth so interesting. 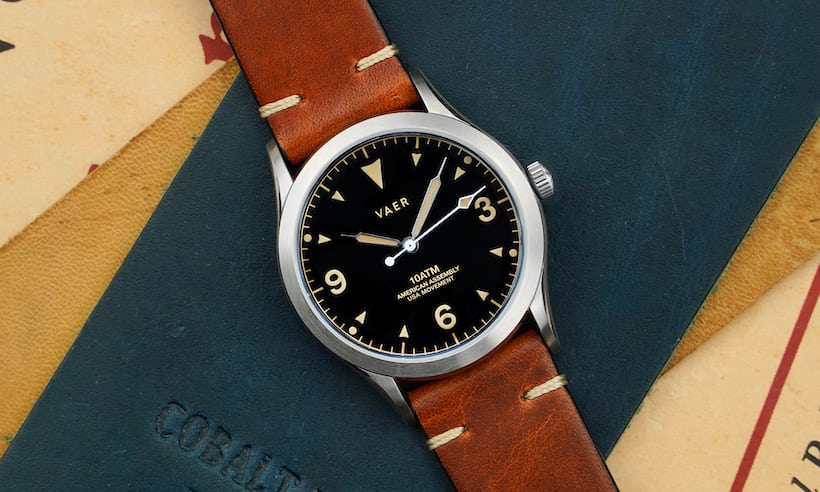 The watches aren’t aesthetically groundbreaking in any fashion. One might be tempted to drop the “homage” label, but I think it’s too harsh a descriptor. There’s obvious influence from all-time favorites like the Rolex Explorer on the C3 Tradition Black Field Watch, and then deep-cut references like the Jaeger-LeCoultre Deep Sea Alarm on the D5 Tropic Dive Watch. There’s also no annoying logo on the dial, something I’ve found to be a consistent weak spot for smaller companies.

It all feels fresh and exciting rather than boring and iterative.

“I don’t think there’s a lot of dignity in the affordable watch market,” Cook says. “The strongest and most resonant brands in the watch world are luxury products, with an extremely high entry point. There’s real segmentation in the market. We look at that as an opportunity. We want to offer a $200 watch that has everything behind it that you’d find in a $10,000 watch.” 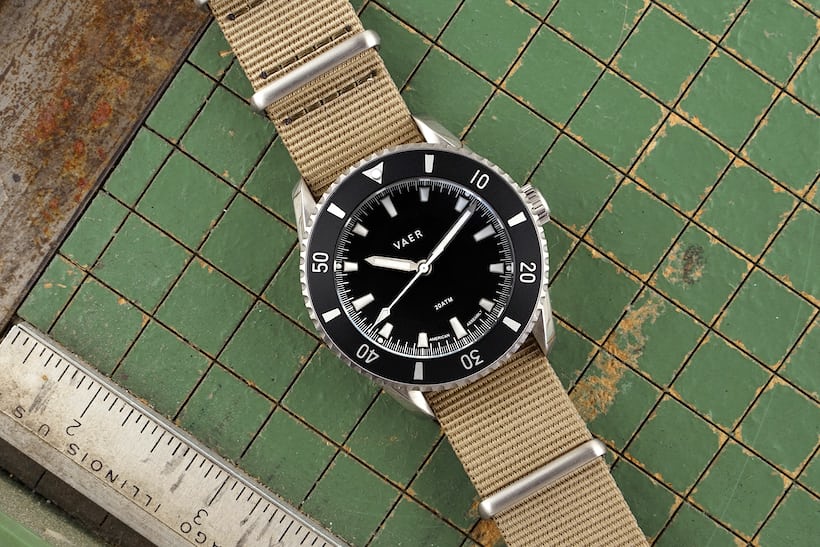 I found myself wondering how many sub-40mm tool watches are out there for under $200. Not many. There’s Bertucci, and then probably a Timex or two. Maybe a few others. But out of the existing options, I can’t imagine any offer United States assembly as an option like Vaer.

That’s a real added value for many people. And it’s not just a marketing gimmick, either. U.S. assembly has helped Vaer with quality control and also in learning more about watchmaking. 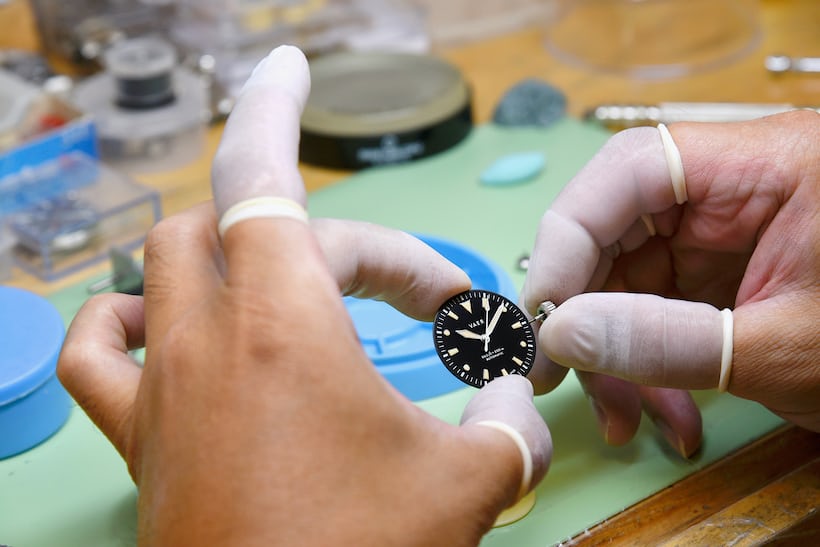 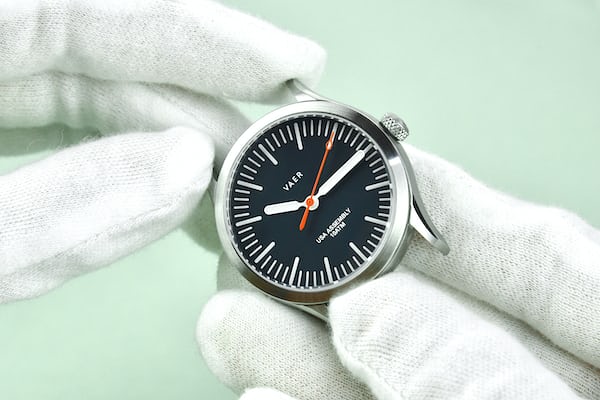 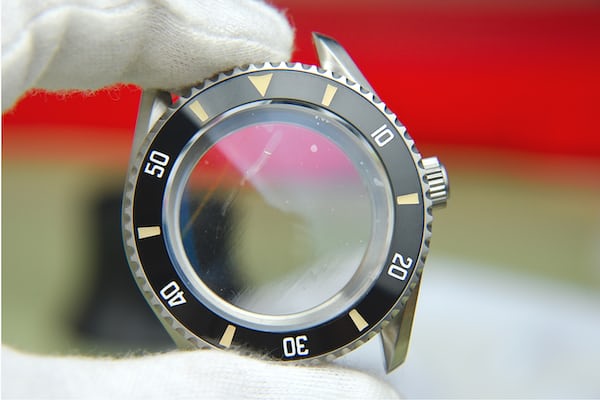 “We are not watchmakers by trade,” says Cook. “By doing U.S. assembly, we are far more informed. Even if we had done Swiss-made for everything, we would be far less knowledgeable about some of the more esoteric details like torque and hand tension. Bringing that assembly stateside has made us better and made our products better. It brought us closer to the whole process.”

FTS, which we’ve previously seen handling assembly for the Benrus Type I Limited Edition and providing quartz movements for Waldan, has been “a fantastic partner,” Torres says.

“Moving our assembly to the U.S. changed everything about how we operate. With overseas designers, you don’t get many options; with FTS, we can see each part. And with each subsequent batch, we’ve made minor improvements to the process. It’s been very, very good for our product quality.”

Vaer’s only been around for six short years, and 2021 has shaped up to be their biggest year yet. They launched their first watch equipped with Ameriquartz in the springtime, followed it with their first field watch using solar-powered quartz in the summer, and recently launched pre-orders for their Swiss-made GMT, which represents a new high point in the young operation’s catalog. 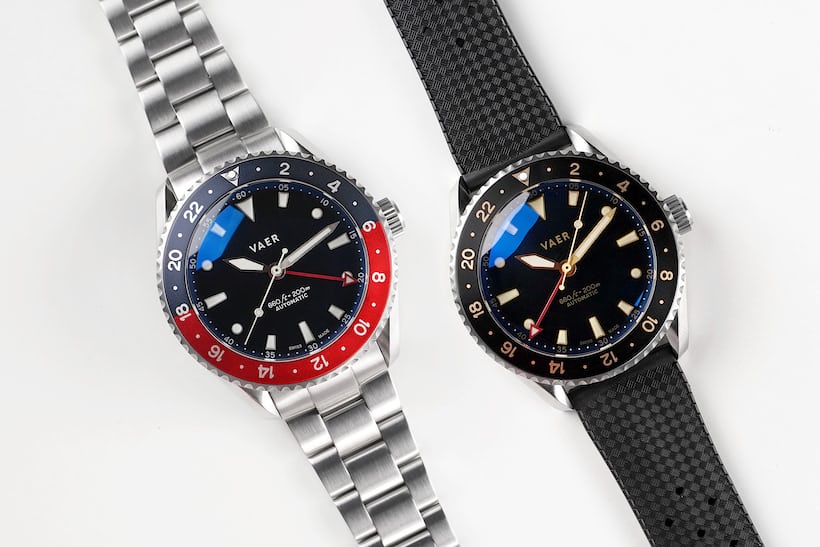 Cook and Torres are still the only full-time employees, but the current state of the business has allowed them to achieve a level of confidence higher than ever before.

“We’ve come a long way,” Cook says. “We’re a self-funded business. Our growth is determined by how much people like us. It really is a grassroots operation that we’ve built from the ground up. We’ve found stability in the product. We’ve created a foundation and we want to get it out in front of as many people as possible.”

The product is strong and the selection has grown leaps and bounds in the last two years. Vaer says that the current division in product selection and revenue is split down the middle between quartz and mechanical watches. But with the success of the new solar quartz models, they expect the split to lean toward the quartz side of the spectrum. In the near-term, the biggest expansion plans Vaer can tell us about is the introduction of additional dial colorways, with more experimental and offbeat options.

But right now, Torres and Cook are amazed at how far the business has come. 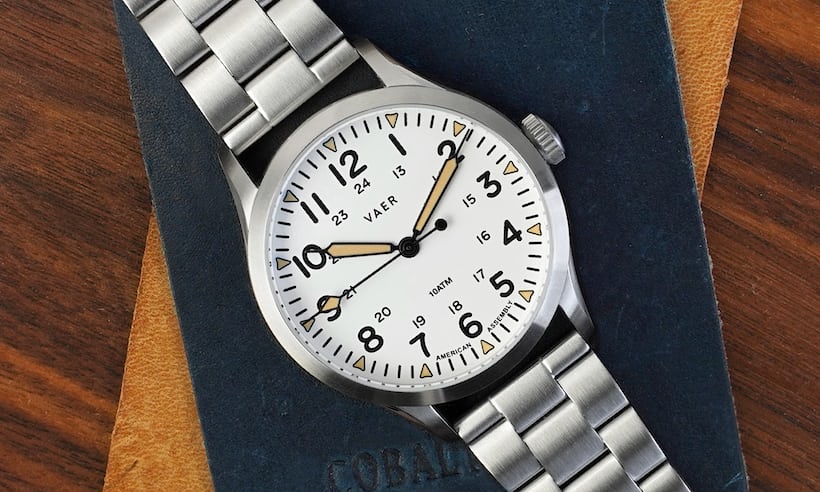 “I studied digital entrepreneurship,” Torres says. “I thought I was going to build an app like everyone else. I went from pure digital, pure apps, pure tech, to now working with hard goods. I never expected that.”

“The most valuable watch is the one you spend the most time wearing. It’s so rewarding to create something that people then embed their memories into. It becomes something so much more valuable than what we sell it as. A watch becomes a part of your life in an important and personal way.”