The BENRUS Type I Limited Edition 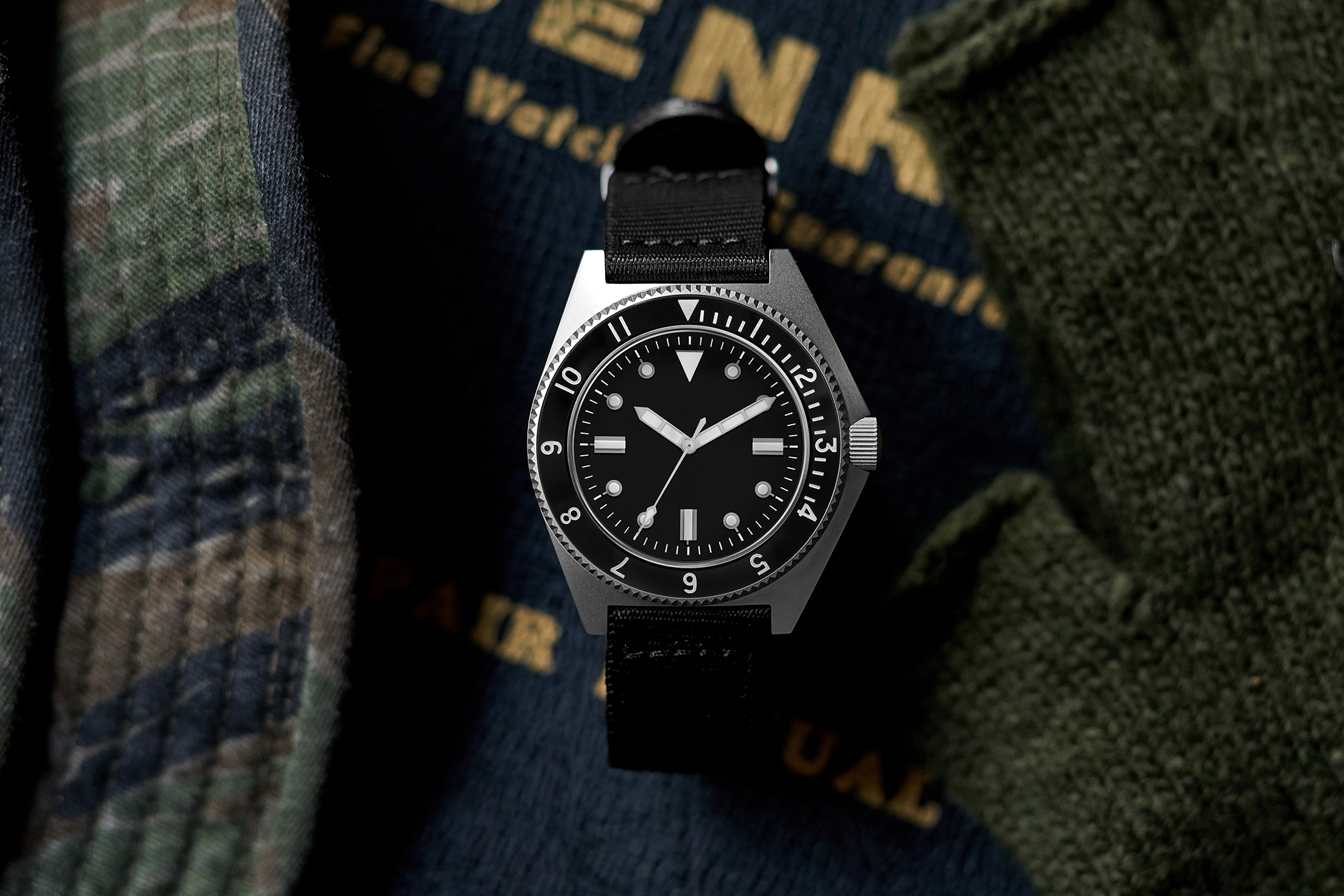 The BENRUS Type I Limited Edition

The BENRUS Type I was created in 1972 as a response to MIL-W-50717, a specification issued by the United States Department of Defense. The MIL-W-50717 described – in intricate detail – the ideal watch for U.S. military personnel of the time, and in the process, created the framework for one of the finest examples of purpose-built watchmaking in history. There had never been a tougher set of requirements for a U.S. government wristwatch contract, and the only brand able to meet that standard was BENRUS, with the Type I and Type II. 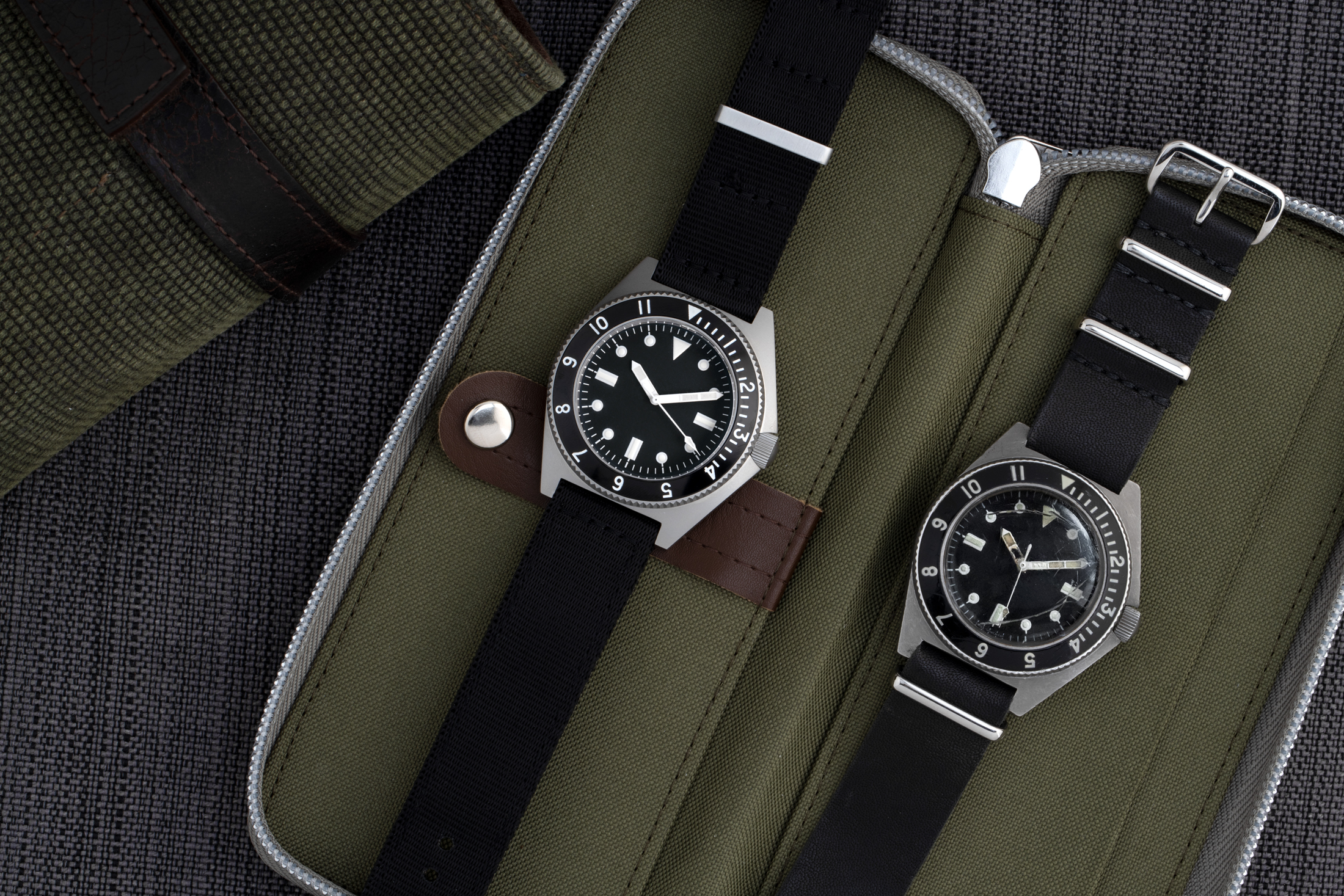 The new-for-2020 BENRUS Type I (left) alongside a vintage example (right) from 1972. Today’s reissue spared no expense in reproducing the watch in precise detail.

The new-for-2020 BENRUS Type I (left) alongside a vintage example (right) from 1972. Today’s reissue spared no expense in reproducing the watch in precise detail.

The BENRUS Type I was never produced for the civilian market and, in recent decades, vintage examples have attracted an immense amount of attention from watch collectors and those who appreciate authentic U.S. military ephemera. Its legend has grown over time, and today, BENRUS adds a new chapter to the Type I’s legacy, with the first-ever reissue of the watch, now available to the public for the very first time. The HODINKEE Shop is proud to partner with BENRUS and be the first to offer the Type I to a new generation of watch collectors. 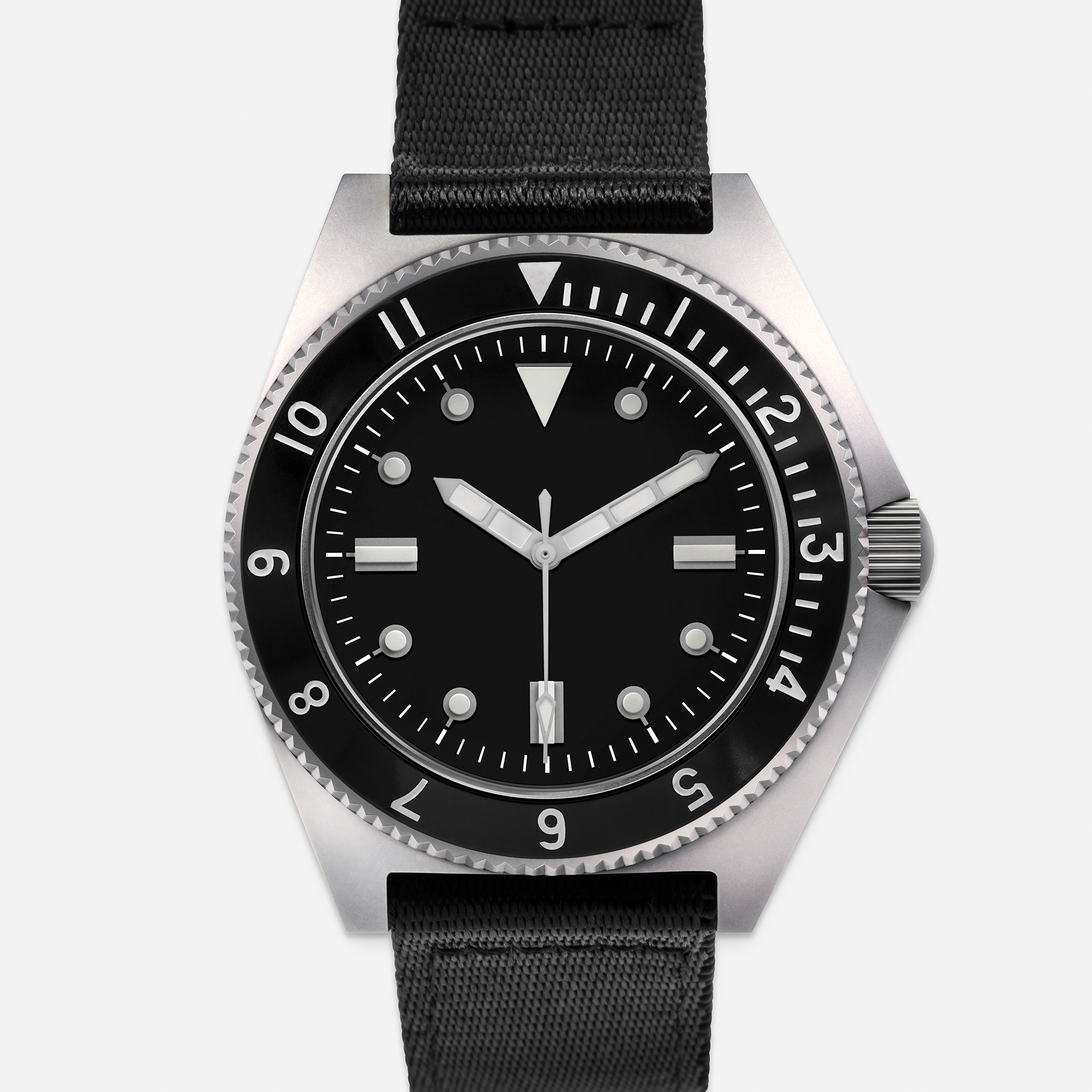 A limited edition of 1,000 pieces, each BENRUS Type I is assembled by hand in Arizona, honoring the company’s rich American heritage. It is priced at $1,695, and BENRUS is donating a portion of the proceeds of each watch sold to the Boulder Crest Foundation, which supports combat veterans and first responders struggling with post-traumatic stress disorder. You can purchase the BENRUS Type I Limited Edition right now, with watches shipping in two to four business days, right here.

A Brief History Of BENRUS And The Type I

BENRUS was never your average American watchmaker. The company was founded in New York City – far from America’s 19th-century horological heartland – in 1921, when the three Lazrus brothers (BENRUS is a portmanteau of founder Benjamin Lazrus’s name) decided to capitalize on the growing trend of wristwatches and began sourcing Swiss movements. For decades, the company produced quality watches for everyday Americans – a fact made widely known through successful advertising campaigns that featured prominent cultural figures, such as Charles Lindbergh and Babe Ruth. 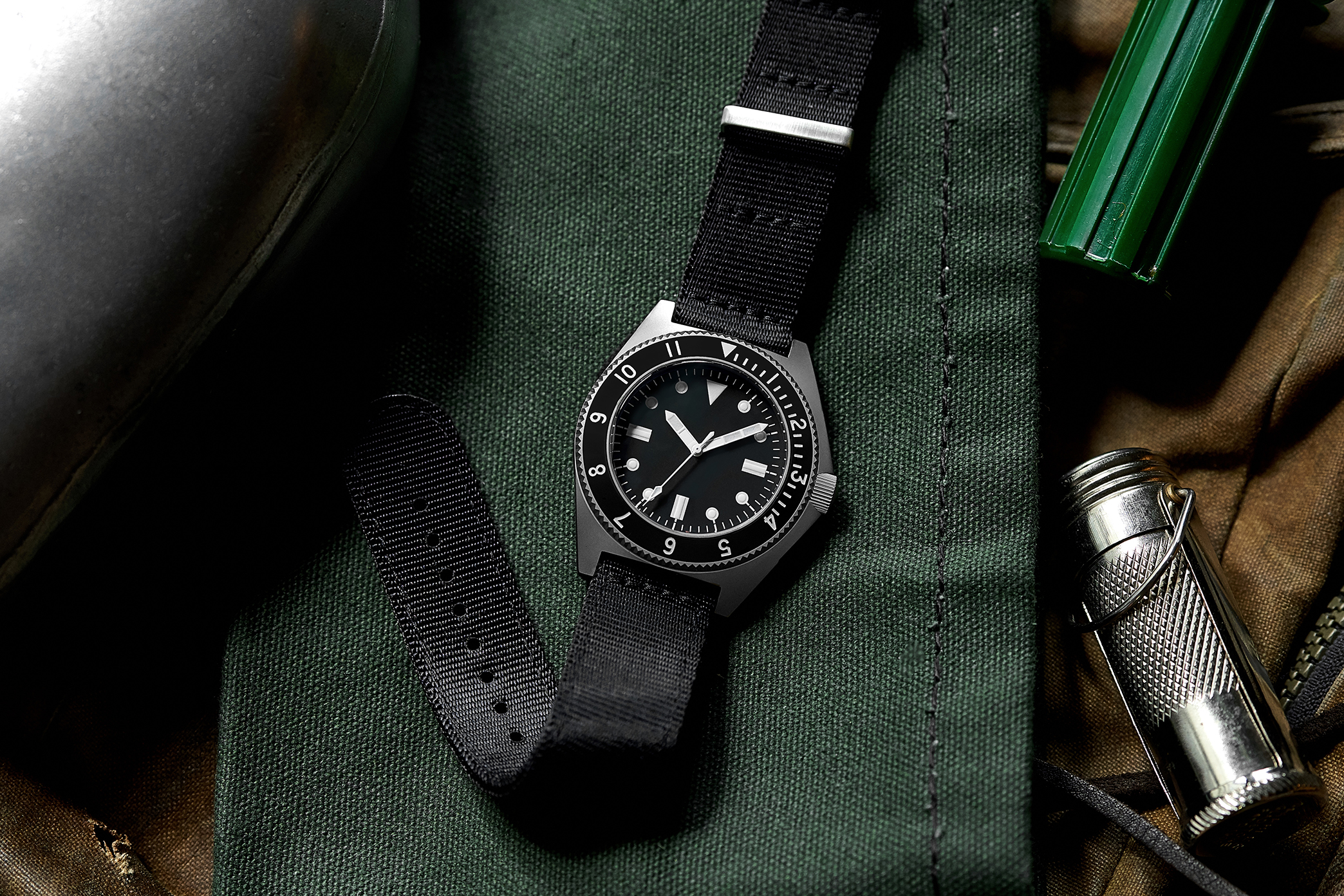 It wasn’t until the dawn of World War II, when BENRUS began supplying timing systems for U.S. military munitions, that the company’s remit began to include U.S. government contracts. In 1964, BENRUS was one of a select few brands to create wristwatches for America’s Armed Forces under the MIL-W-3818 specification. It was during this time – the middle of the Vietnam War – that the Department of Defense discontinued the practice of supplying wristwatches as standard operating equipment for soldiers; only those who most required robust and precise timekeeping would receive a watch to accompany their missions. 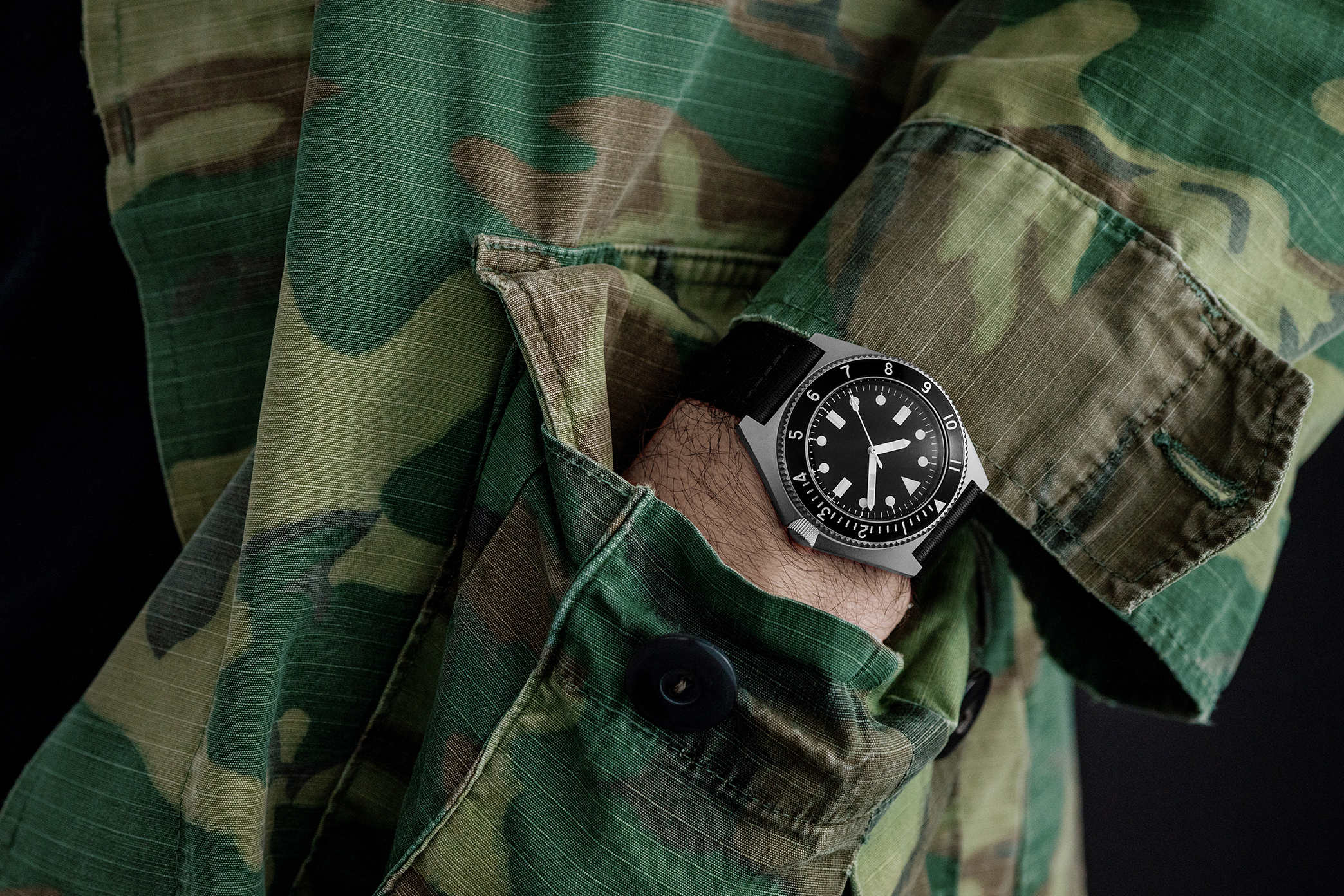 The Department of Defense returned to the drawing board to create the new MIL-W-50717 standard, which demanded a watch that could function just as flawlessly at a depth of 1,200 feet underwater as it did an altitude of 35,000 feet. The watch would have to be able to handle any sort of abuse thrown its way from multiple special forces divisions, including the U.S. Navy UDT/SEALs, U.S. Navy EOD, U.S. Navy Divers, Army Rangers, Green Berets, and CIA operatives. The entire MIL-W-50717 specification stretched over 5,000 words, describing exactly what was needed to ensure that the servicemen who required a watch the most could rely on what they were provided. 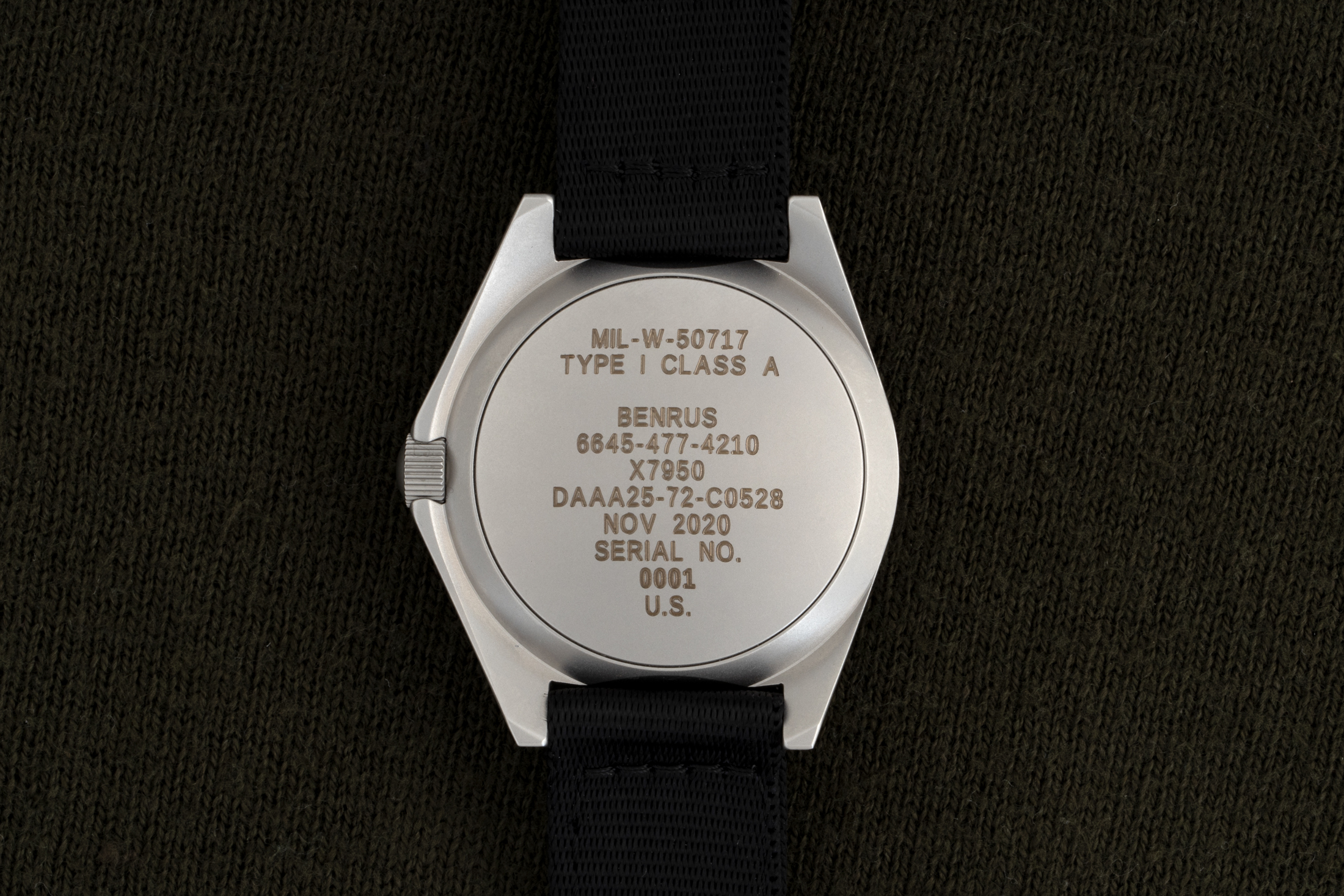 The caseback engraving is preserved from the original design, except for the date of delivery (NOV 2020) and the individual serial number (0001 – 1000).

The caseback engraving is preserved from the original design, except for the date of delivery (NOV 2020) and the individual serial number (0001 – 1000).

BENRUS proposed the Type I, which featured a black dial with no markings, save for hour markers painted with white luminescent material and a slight minute track running along the periphery of the dial. The simplicity of the design conceals the complex case construction, which was top-loading to decrease the likelihood of water ingress. The case was matte with an asymmetrical profile that met its screw-down crown at its furthest point, giving it a sturdy construction that could handle shocks and impacts with ease. And the acrylic crystal featured a seamless dome that transitioned to the friction-lock bidirectional 12-hour bezel to ensure readability at all angles. The hacking automatic movement inside was, of course, sourced from Switzerland. 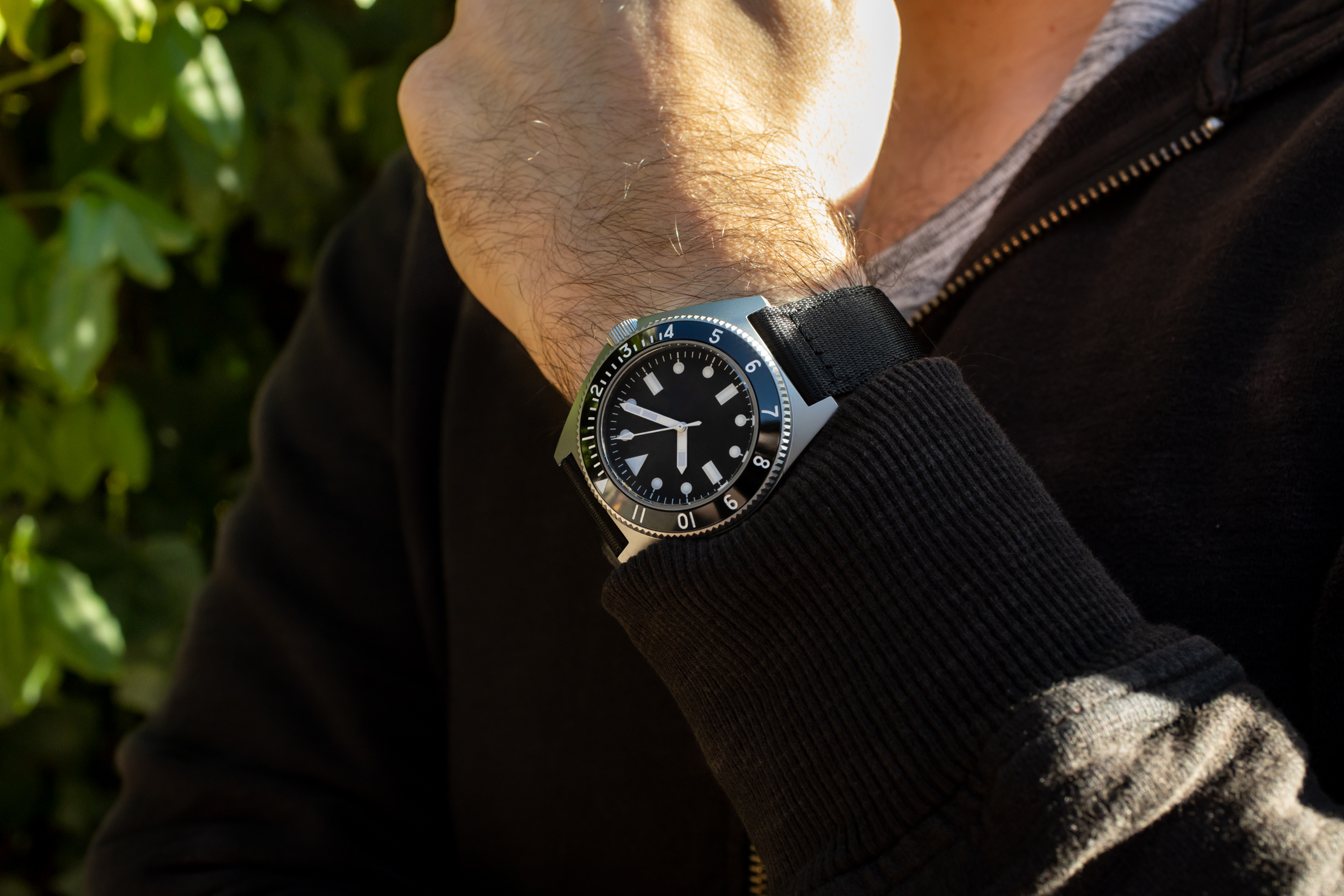 Between 1972 and 1980, approximately 16,000 examples of the Type I and Type II (which featured a 12/24 hour dial) were produced and issued to military personnel. They were never released to the public, and vintage examples have seen a steady increase in value in recent years, as a premier example of function-forward design in watchmaking as well as for the unique role these watches played in recent American military history. In the 40 years since production of the Type I ceased, BENRUS has never reissued the watch. Although its clean, legible design language – focused on legibility and robustness above all else – has inspired a number of modern interpretations from outside parties, there has never been an official reproduction from BENRUS of its iconic military service watch – that is, until today.

A Return To Form
Watches with unsigned dials have a naturally mysterious quality. They offer no outward-facing indications of their past, history, or identity – they’re more focused on functionality than anything else. The original BENRUS Type I, arguably the best-known watch with an unsigned dial, built its historic reputation on the quality of its construction and the simplicity of its design. The 2020 reissue of the Type I carries those attributes into the 21st century, with a keen awareness for the success of the past. It has been revived with clinical precision, with only slight modifications in accordance with contemporary watchmaking. 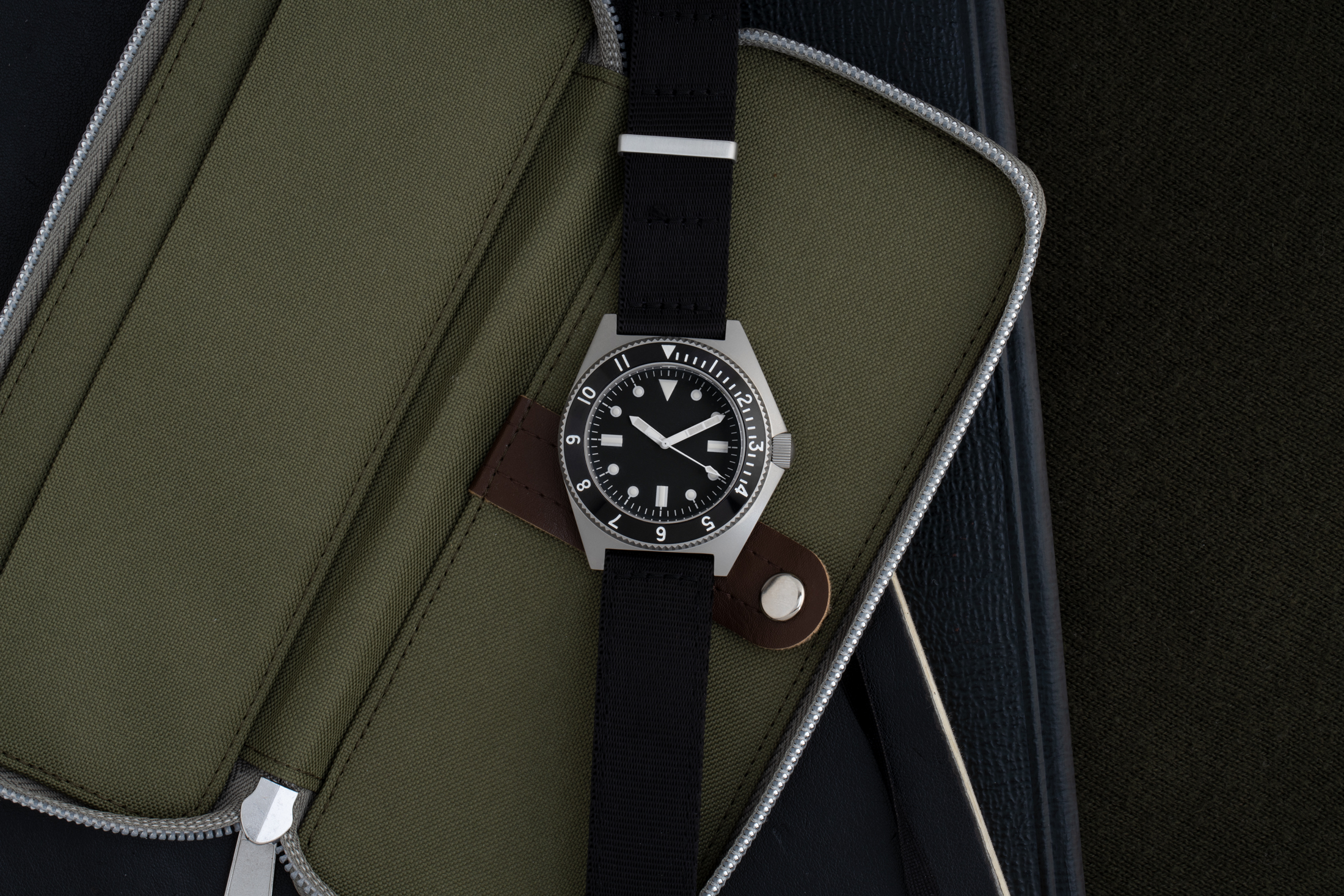 You’ll find a sapphire crystal instead of the prior acrylic, but it’s been recessed into the bezel to an identical degree of its predecessor, all in order to capture the same smooth transition to the bezel for which the vintage examples were lauded. The black bezel insert is now anodized aluminum, which replaces the former acrylic, but retains identical 12-hour numerals – painstakingly recreated – that are etched in white; the bezel is also dotted with one-minute hash marks up to the four-hour marker. The combination of a 12-hour display with a 20-minute graduated scale on the bezel is an underrated design choice that adds to the Type I’s total functionality – you can use the bezel to track elapsed time by the hour or the minute, and even track a second time-zone with ease. 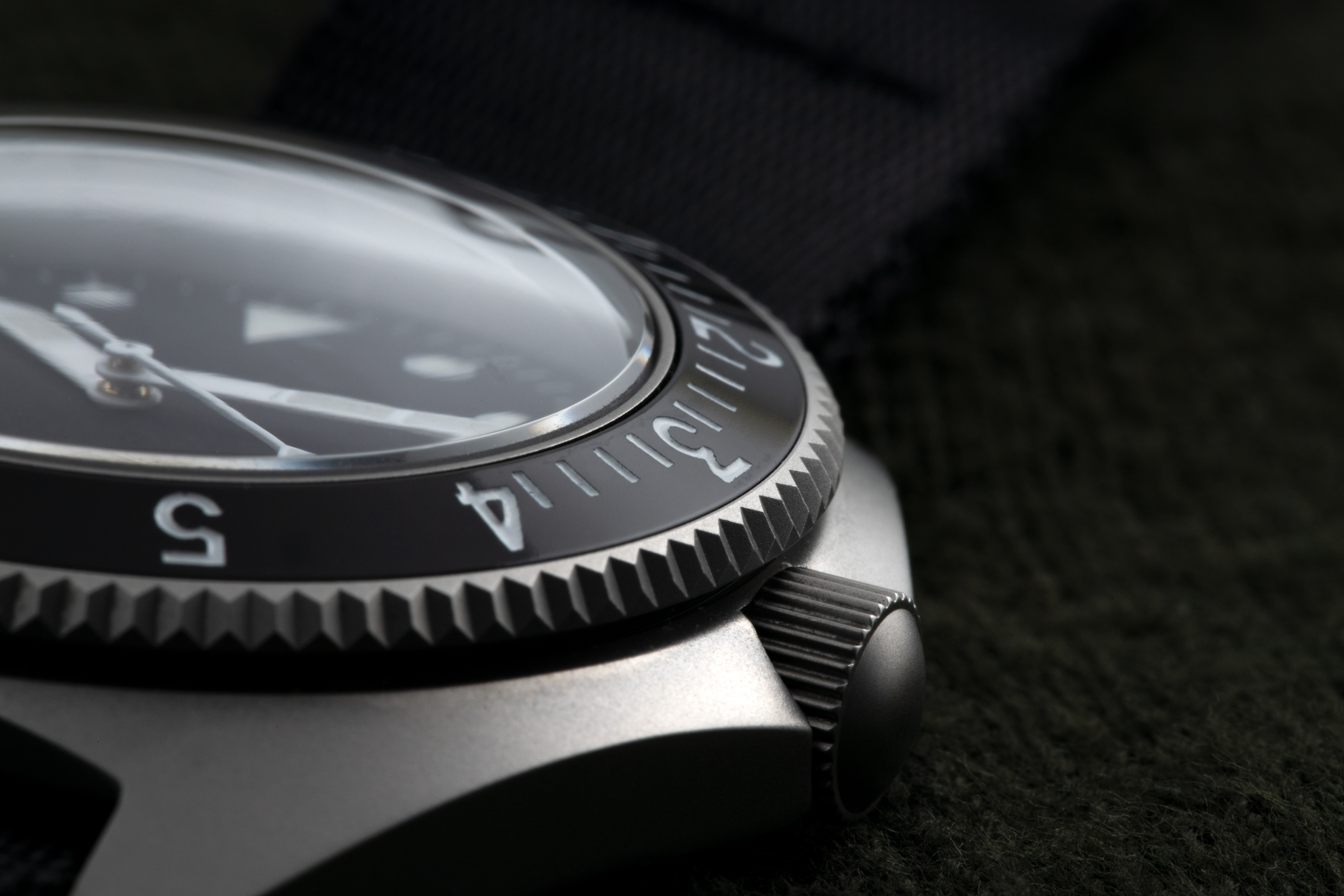 The black bezel insert is anodized aluminum, while the numerals are etched in white. It slopes slightly downward for legibility at all angles and is notched for ease of grip.

The black bezel insert is anodized aluminum, while the numerals are etched in white. It slopes slightly downward for legibility at all angles and is notched for ease of grip.

The dial is the same matte black tone you’d expect out of the Type I, and the use of white BWG9 Super-LumiNova on the hour markers and ladder hands has been reproduced with considerable thought given to the placement of the original. BENRUS selected BWG9 Super-LumiNova to maintain the same clean white tone a 1970s BENRUS Type I would have had when new, even though it glows a shade of bright blue rather than the green color of the original lume application listed in the MIL-W-50717 standard. 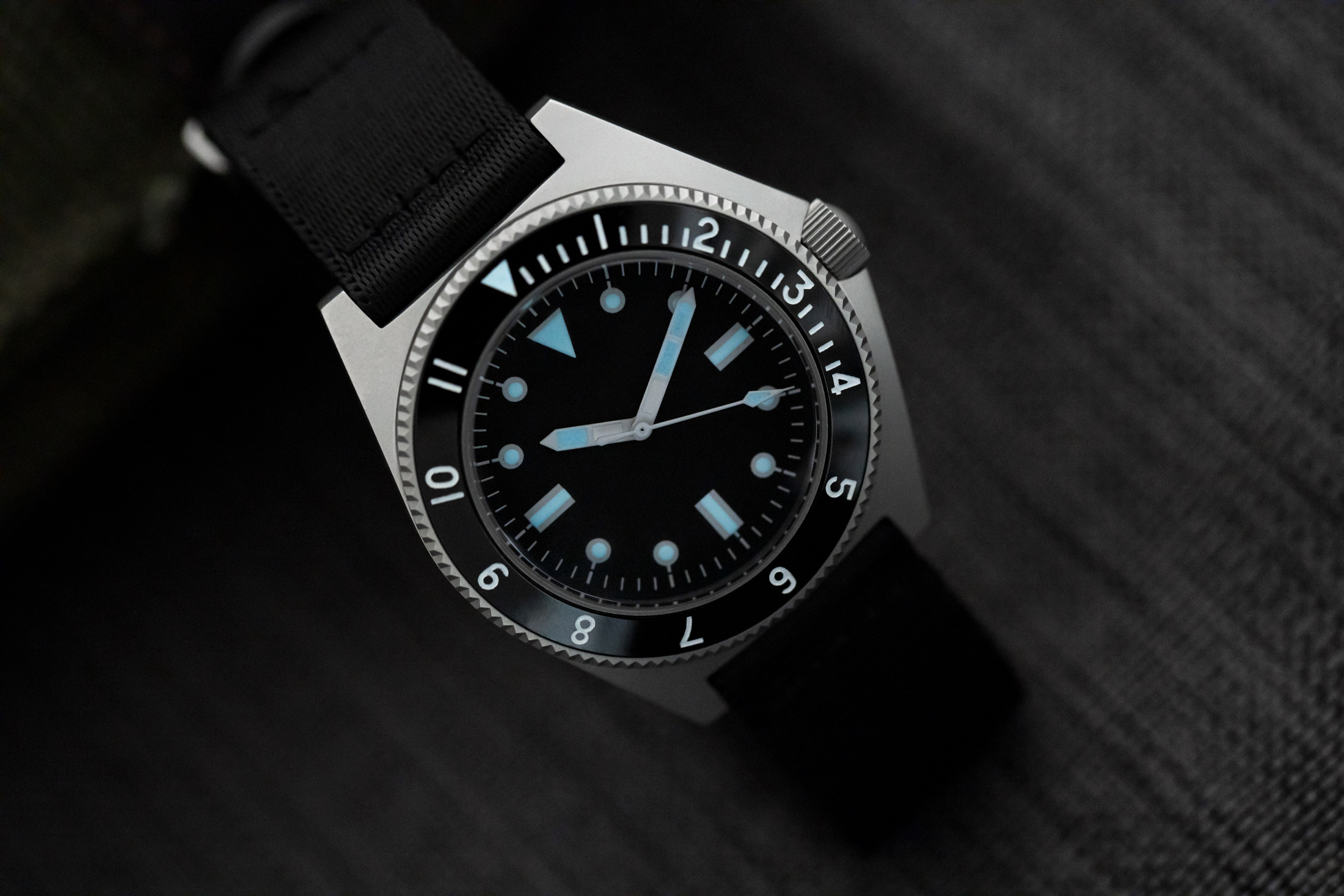 The movement inside the new BENRUS Type I is a hacking automatic ETA 2681 (the vintage called on an ETA 2620), and the steel case offers matching proportions to the original and features a bead-blasted finish that matches the appearance and quality of the vintage examples, which were a parkerized non-stainless steel. The water resistance is tested to 300 meters, almost identical to the total depth of 1,200 feet demanded by the MIL-W-50717 standard. The caseback engraving is, once again, the same as what you’d find on a vintage example, from the font to the verbiage. The only update here is the production date has been shifted to reflect the current month and year (it reads NOV 2020 on all examples), and the serial number is unique to each respective watch (0001 to 1000). 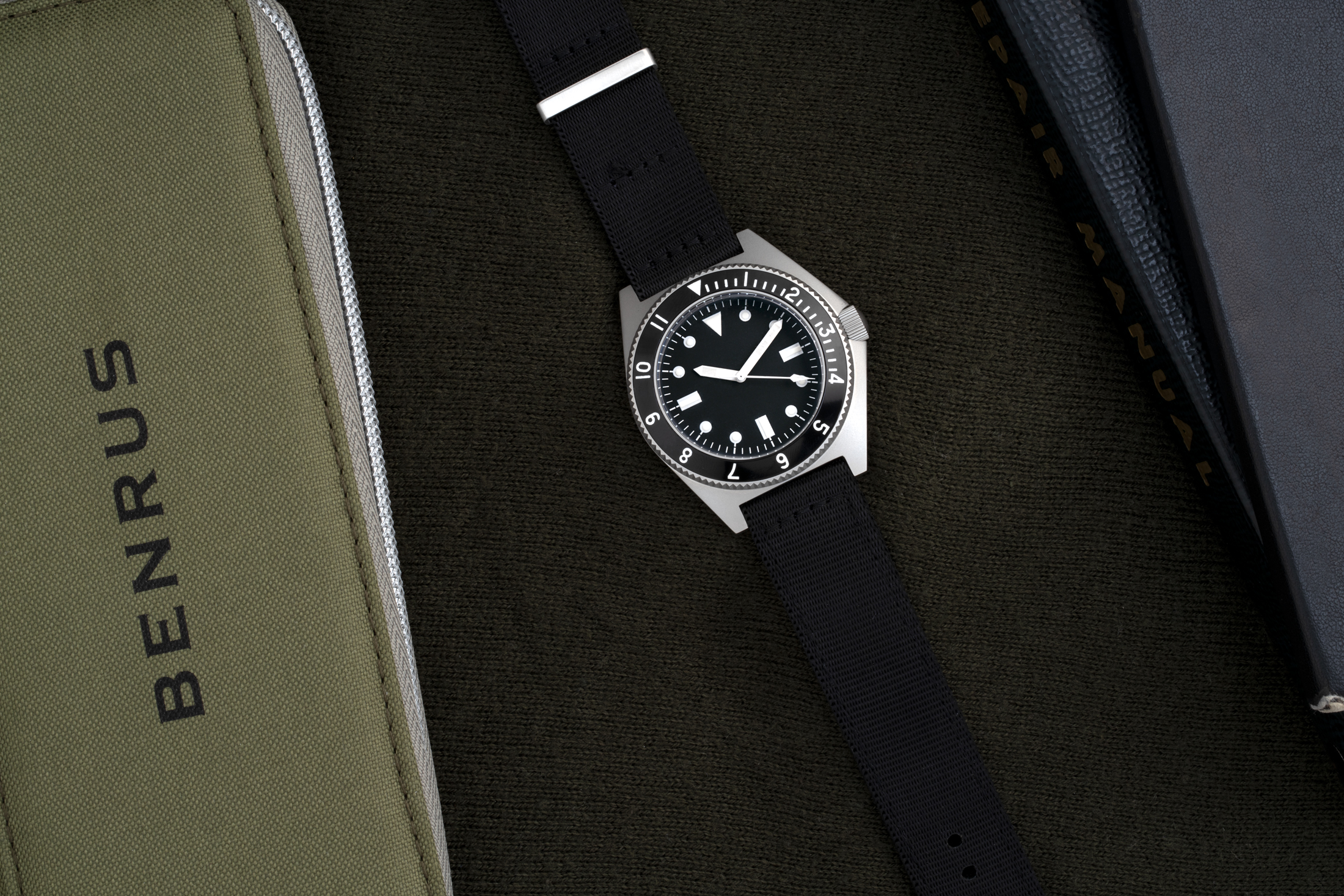 One additional update is the Type I now comes on a high-quality two-piece nylon strap instead of a one-piece NATO, something permitted by the use of non-fixed spring bars, which will allow you to change the strap of your BENRUS Type I example at any time. The lug width has also been ever-so-slightly increased from the historical examples. It now measures an exact 20mm across rather than 19.5mm; BENRUS was able to increase the lug width without changing the case dimensions whatsoever from the original. It still measures 42.5mm in diameter and 15mm thick. 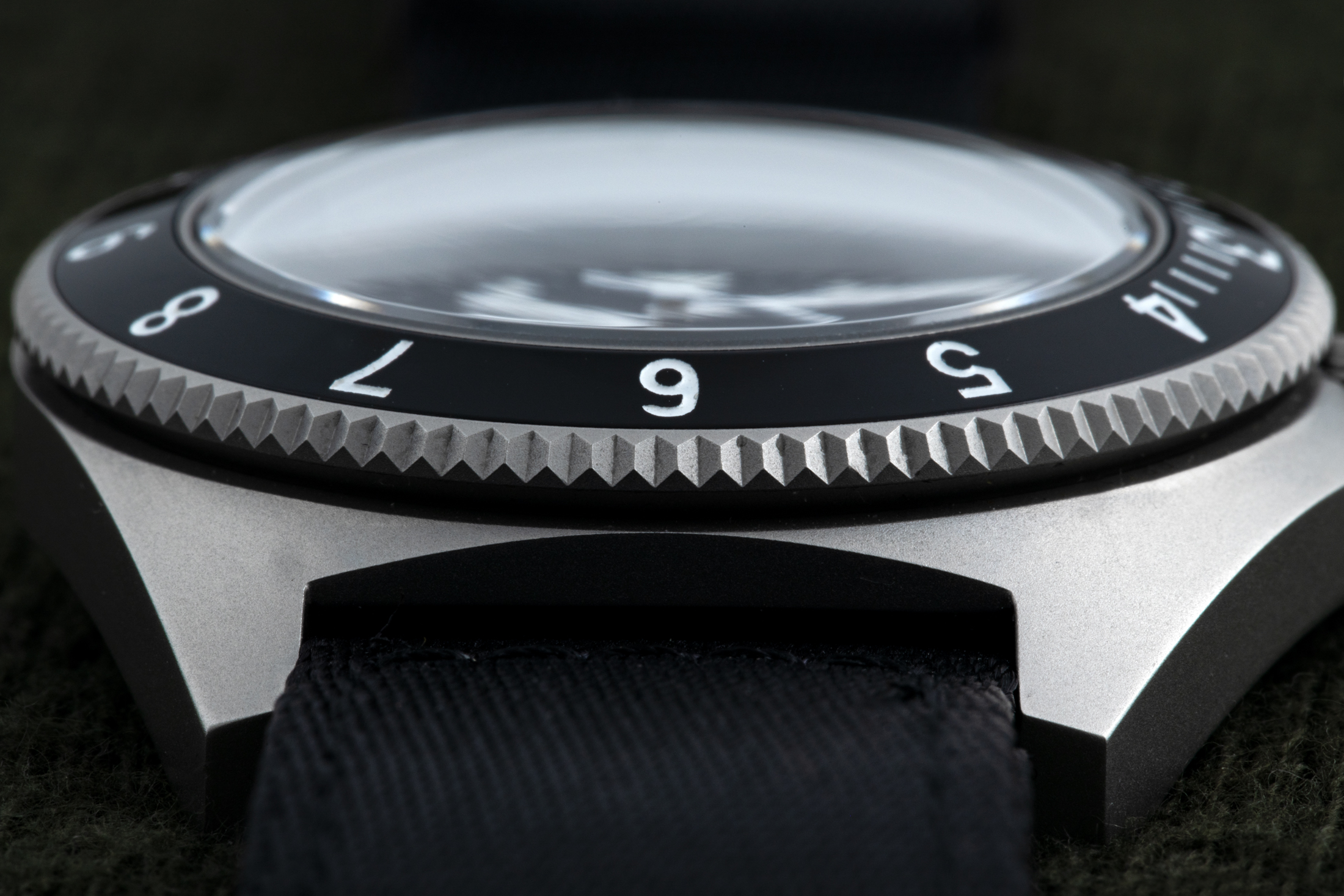 The lug width was increased from 19.5mm on the original Type I to 20mm on the 2020 edition, with zero impact on the rest of the case dimensions.

The lug width was increased from 19.5mm on the original Type I to 20mm on the 2020 edition, with zero impact on the rest of the case dimensions.

While the movements come from Switzerland, the assembly, regulation, and quality control of each BENRUS Type I occurs in the United States, at Fine Timepiece Solutions (FTS) in Arizona. BENRUS works with a dedicated team of watchmakers at FTS to ensure a high level of quality control and that every Type I is ready for the same amount of use and wear a vintage example might have seen.

Discover TheBENRUS Type I In The HODINKEE Shop

The BENRUS of today isn’t the same company that secured multiple military contracts in the 1960s and ’70. It’s not even the same company it was a few years ago – it recently relaunched under new management led by Michael Goeller, the former global vice president of operations at Bulova. The company is still based out of New York, however, and the Type I is once again assembled on American soil. With the company’s centennial anniversary just months away, we believe the Type I Limited Edition represents a return to form for BENRUS in more ways than one. The watch is not only built to the boundary-pushing standards of the original (with a few slight upgrades for contemporary wearability), but also stands out as a clear-cut example of authenticity in design. 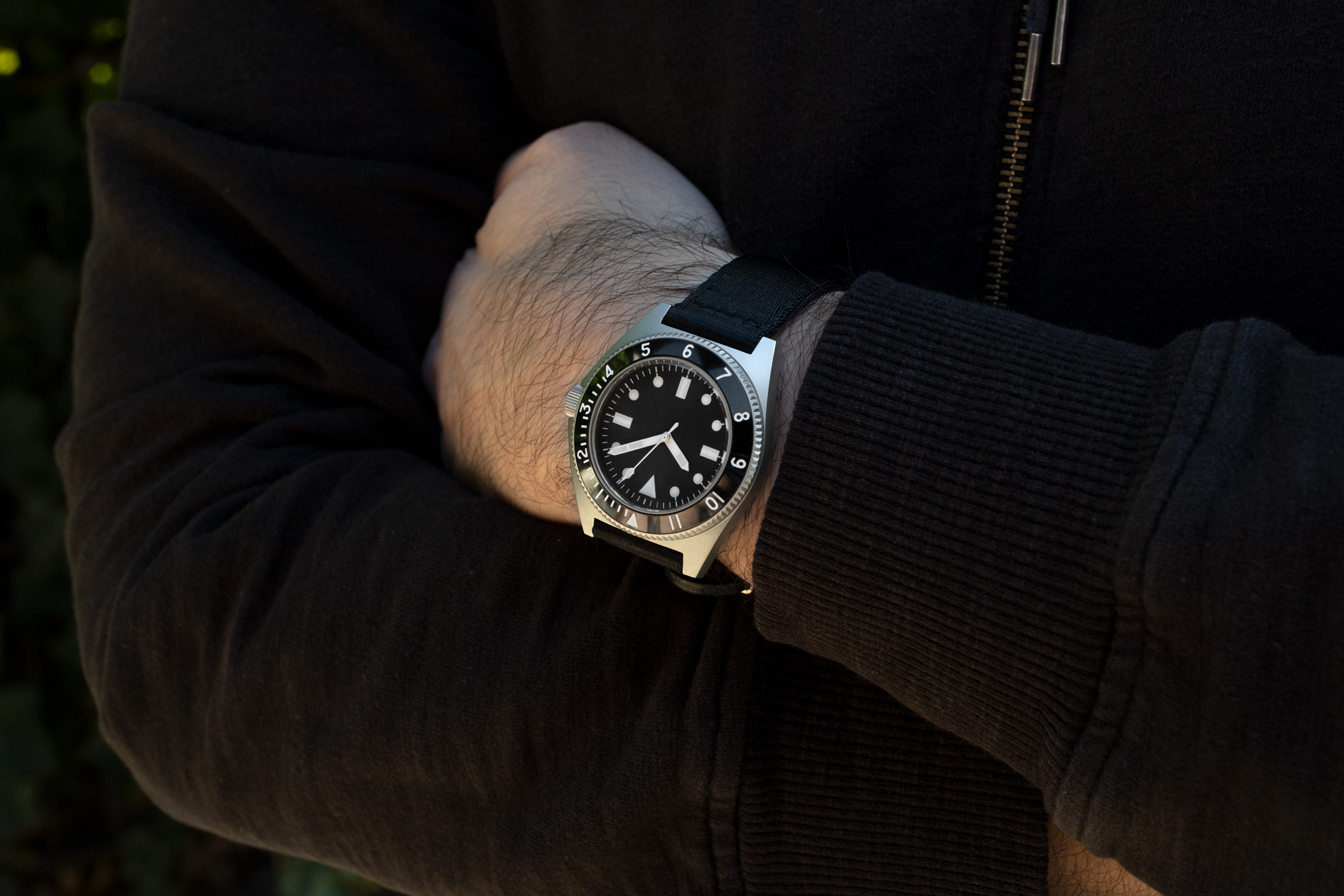