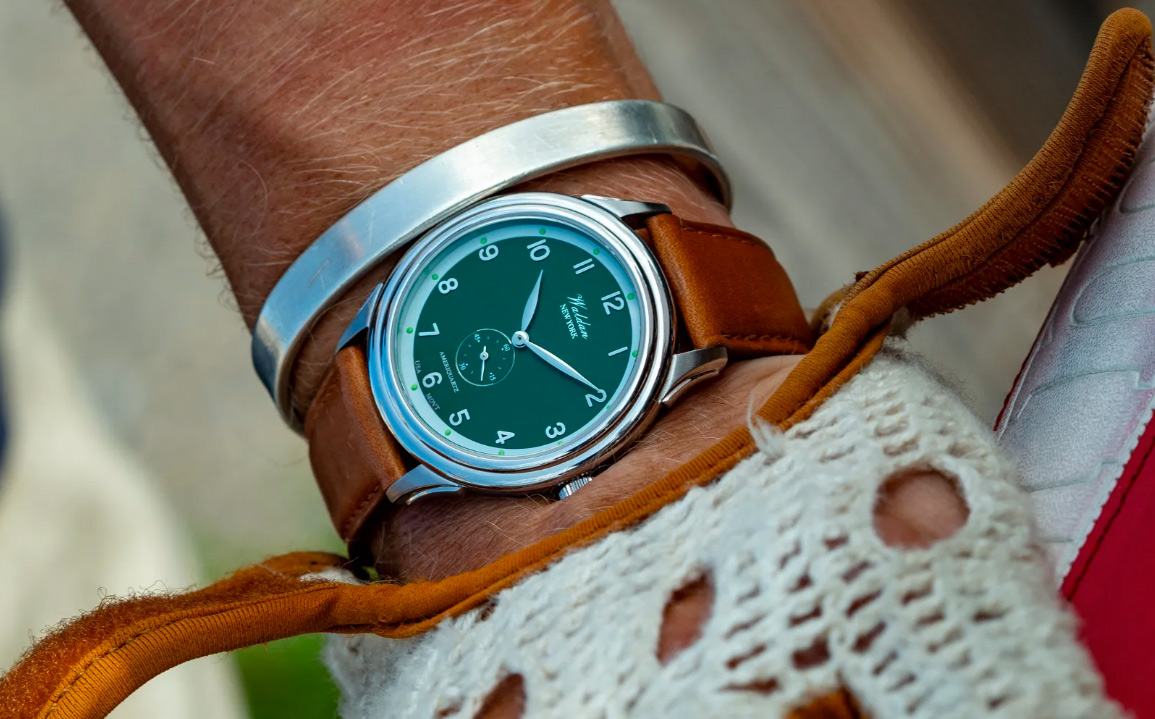 Oscar Waldan, the namesake behind Waldan Watches, was a Polish watchmaker trained by a man named Manek, a fellow prisoner at the Buchenwald Concentration Camp during WWII. Oscar, in between apprenticing for Manek, endured unthinkable conditions and torture under the Nazis, until liberated, when he fled to Switzerland. While there, he furthered his passion for watchmaking and maintenance, and formulated a plan to relocate to the United States, through Ellis Island and into New York City.

Oscar passed in 2018, 39 years after he established Waldan Watches, his eponymous watch company, in New York. The brand still preserves Oscar’s original principles: to spotlight the intricacies of complex movements and emphasize the employment of various complications; to produce watches with endurance, elegance and durability; to commit to careful craftsmanship and the use of quality components; and to work harder the next day than the last. Andrew, his son, who’s now at the helm of the company, was raised in lockstep with Oscar. As a toddler, he slept in a crib in his father’s corner office, just feet from where the watches were assembled. As an adolescent, he followed along as his father bounced from showroom to conference room to drafting table.

As such, assuming a leadership role within the organization became a personal goal for Andrew. He knew the ins and outs of every vertical, from how the watches are made to how to sell them. Most importantly, he understood his father’s legacy, and had context for every decision he had made along the way—be that working for Tissot and Rolex to producing timepieces for Tiffany & Co and the Museum of Modern Art and slipping his own signature on the casebacks of the white label watches he produced.

Andrew has incorporated these lessons into his own strategic planning for the brand, which he now oversees as president of the company. But he’s made one major adjustment: instead of furthering his father’s “Swiss-made” identity, he’s rebranded Waldan as an American watch company, emphasizing his father’s achievement of the “American Dream.” We spoke with Andrew to discuss the switch, the brand’s new line of Heritage watches and his father’s legacy.

It’s incredibly difficult to distill your father’s story down to a few paragraphs. Where do you begin?

I guess that would depend on how many times you’ve heard the story! Kidding aside, I don’t really distill the story. Whether the moments were positive or negative, my father’s story is unique, and I aim to tell it in its entirety. My father’s story resonates with many people for many different reasons, whether by an attachment to the story about his life in the war, or the focus on his tenure in the watch industry from the 1960s on, to his influence on other watch companies.

His talent and life experiences created the iconic designs Waldan is known for, and I took that story as the base of inspiration for the concept and design of the new line. This new line is my attempt to offer something new to the modern consumer, but from a product design standpoint, I wanted to stay within the framework that my father had created when it came to the ethos of what made a Waldan Watch a Waldan Watch. Those qualities are that the watch is well made, rich in detail, doesn’t look like everything else, offers a lot of bang for the buck and tells a powerful story.

My father’s life story is also why I made the decision to shift Waldan to be an American watch brand instead of a Swiss-based one after he passed on. Yes, for nearly 39 years, my father made great Swiss watches for companies and collectors alike, however, his story is ultimately a nod to the American Dream. He stepped off a boat on Ellis Island in 1946, a Polish refugee and survivor, and made something out of himself from nothing.

You took it upon yourself, after his passing, to invigorate the brand with this new American spirit. What does the shift mean to you?

It means a lot to me, as I see it as a natural evolving point for the brand, but it also strikes a personal note. My father was always a little more reserved with his history when I was younger, but became more open in his later years as we talked about how his story needed to be told. So, to be able to continue to tell his story and keep our family business and craft going, as his son and the next generation, makes me proud. And personally, as the first generation of my family born here in the US (my mother came here from the Philippines in the 1980s), to be able to carry on our business in a country that has given so much opportunity to my family makes me equally as proud.

How does the Heritage line reference works your father did? How does it differ?

There are quite a few differences between the Heritage collection and Waldan’s other watches. The main one being that this watch is quartz as opposed to mechanical, and cased in a more accessible 316L stainless steel, as opposed to 18k solid gold or platinum. However, there are crucial design elements that I made sure to carry over when I designed this watch, taken from some of the classic Waldan models to reference my father’s work and make sure that the product DNA stayed consistent throughout this new direction.

We’ve always been known for having aesthetically appealing dials, rich with detail, and elements in the Professional model’s dial such as the bold, applied markers (the same exact font as the applied gold markers on the enamel dials of the ref. 0195 Chronograph Chronometer), custom molded leaf hands (traceable to hand sets of the ref. 0181 Astronic Chronograph) and the superluminova plots on the outer rim of the dials help to drive value and quality to our collectors.

The other important nod to my father’s work is the overall quality of the watch. I know how easy it is to think that a $300 watch probably won’t hold up in the longterm, but I cannot stress enough how durable these are and how they are built to last. These innovative movements, while quartz, are American-made, robust, jeweled, individually hand-assembled and tested, and made of metal, which allows them to be serviced as a mechanical movement. Traditionally, for most watches in that price category, once the movement goes kaput, that’s it. Our watches can be serviced, we stock parts and do all repairs domestically in Arizona, in the same facility where these watches are assembled. All Waldan Watches are also individually hand-assembled and tested under a proprietary 0 defect ATAC protocol (Assess, Test, Assemble, Certify). These watches may not weigh a lot on the wallet, but they do pack a punch when it comes to the integrity of the build.

You grew up in the watchmaking room but did the business side fascinate you as well?

The watches always fascinated me, since I had literally grown up around watches and parts. I became enthralled by understanding how these parts worked and fit together, but more than the watches themselves, the relationship side of the industry was what fascinated me the most. The office was always a melting pot of culture, and it was amazing to not just see, but also travel with my parents to big shows like Baselworld and across the US for trade shows by guilds like the IWJG and get to understand the dynamics of these close-knit, intercontinental friendships and relationships they had with collectors, suppliers, dealers and so on that spanned decades.

Relationships were big for my father, and he loved to communicate to anyone who would listen. From an early age, I was sent to a French Lycée school in New York and later, when I was around 10 years old, would translate correspondence to and from Switzerland for my dad in the office. I still maintain relationships of my father’s today; one even told me he remembers when they were in the middle of a meeting and my dad had realized he needed to go pick me up from school, so he continued the meeting with this client in the car, and they picked me up from school together.

What elements of Waldan Watches International remain? Are there distinctions made between the American initiative and the auxiliary watchmaking work? For example, white label timepieces for brands, like your father did for Tiffany?

Everything remains, but in limited quantity. The white label watches for Tiffany, Neiman Marcus, etc are long over. While we do have parts and the capacity to service these watches, the production has ended. These watches, like the Tiffany/Waldan creations have become very rare and incredibly hard to find. The generation of Waldans my father created under the Waldan International/Oscar Waldan name in the ’90s and on were meant to be finite to begin with, because he was limited to the cache of mechanical movements he had secured during the quartz crisis in the 1970s. We do maintain a reserve of these sought-after watches, however these cannot be purchased online as you could a Heritage model.

Has it been difficult to enter the market this year, at this price point?

Our biggest challenge was launching in 2020, during a global pandemic. We also encountered the challenges that come with starting from scratch and reentering the market after a period of inactivity. Before Waldan Watches relaunched this year, we were inactive for a period of almost three years after my father’s passing. So, relaunching with an entirely new product and competing in a different price tier comes with its challenges but also its benefits. We have a much more accessible product now, in terms of wearability and price, which allows us to reach a wider base than before.

My ultimate goal is to tell our story and get people more interested in watches by delving into the nostalgia of our history and the exceptional nature of the product. What really drove me to do this was plain and simple: I wanted to create something for my generation, but also for anyone who would appreciate what I’m doing.

Does this price point pose limitations? Of course, they’re of quality but are there ways you’d like to change or grow the American-made / Heritage collection?

I think that this flexible price point offers more options than limitations, because without sacrificing the integrity of the watch, and highlighting the technical complexity of it compared to others in its price category, we’ve created a really solid foundation from which to build on. You’ll see that transcendence and growth come in the form of more product evolution as we unveil our complicated quartz collection next year with a return to American-made mechanical by 2025.

Although my current collection is different and is more modern than what he started, I can hear his voice echoing in my head to keep believing in the vision I have and keep on. These watches are only the beginning.