Can This Quartz Movement Save the American Watch Industry? 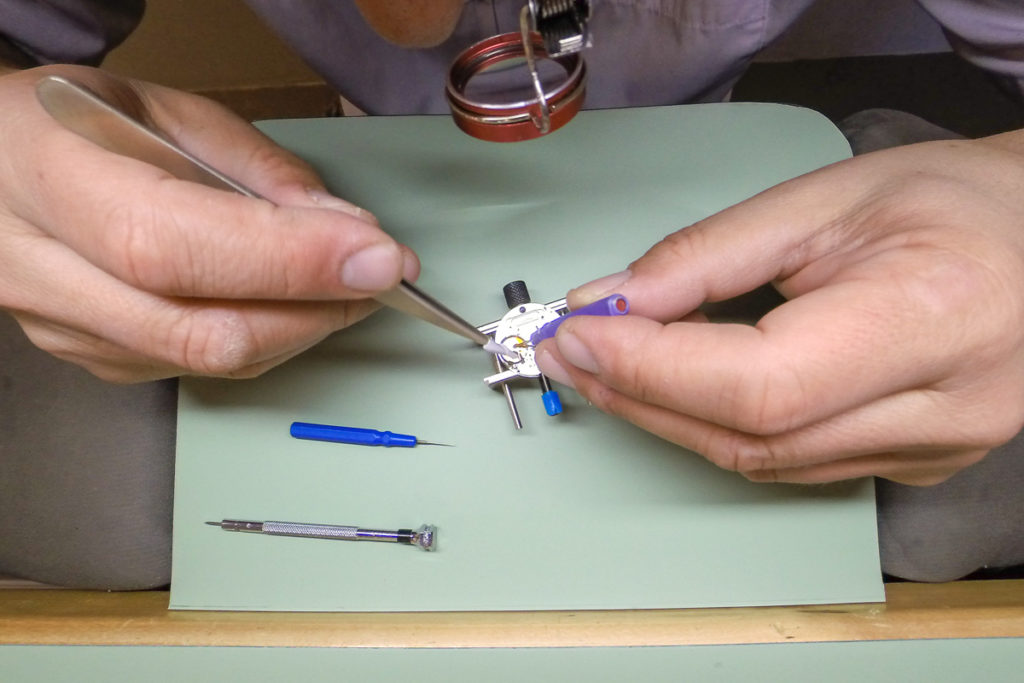 Can This Quartz Movement Save the American Watch Industry?

The lights dim and the wall opposite a digital projector springs to life with a slickly produced video edit, replete with thumping techno music, squeaky-clean assembly lines, and panning shots of young, tattooed watchmakers sitting elbow-height at brightly lit workbenches. The imagery cross-dissolves to the surrounding geography, where there’s a fountain shooting a tall stream of water skyward from a local downtown lake, evoking the iconic Jet d’Eau on Lake Geneva. But we couldn’t be further from Europe’s spiritual center of the watchmaking world — we’re a few clicks removed from Phoenix Sky Harbor International Airport, in what’s nearly the middle of the Arizona desert. However, what’s happening here could also very well be the real deal, a long-awaited spark touted to re-kindle the collective American watch renaissance.

At the center of it all is the new “Ameriquartz” movement, assembled by Fine Timepiece Solutions in a brand new watchmaking facility set inside the 69,000 square-foot East Valley Institute of Technology Fountain Hills campus — an operation projected to add as many as 300 jobs to the local economy as the facility grows. The goal here is not just to make it easier for North American watch brands to compete in a global market, but to produce a competitive new movement product that could one day potentially disrupt the Swiss and Asian stranglehold on the market and establish a proud new home for the American watchmaker.

Much has already been written about the demise of large-scale manufacturing in the American watch industry, but if you look closely enough, there’s a clear groundswell of activity around smaller U.S.-based brands looking to challenge the industry’s currently held norms in the not-so-distant future. Granted, regardless of choice, many of these brands are still forced to rely on European or Asian movements, fabrication, or assembly, but the tug-of-war to return some of the outsourcing that began in the 1930s is starting to be felt on the other end of the rope. And what we witnessed back in early February might not yet be on a scale large enough to be considered a shot across ETA or Ronda’s bow, but it is certainly a small spark that could very well catch fire if enough American watch companies sign on.

“You can only do so much with all the different ingredient sourcing from around the world,” says Abingdon Mullin, founder of Abingdon Watches based in Las Vegas. “With the manufacture of quartz movements now happening one time zone away, nothing gets lost in translation or opposite business hours,” she continues. The convenience for U.S.-based watch manufacturers is certainly a big draw for brands like Abingdon, which currently relies on turnkey movement solutions on the other side of the world, where long lead times, confusing laws, taxes, and multiple languages all compound the challenge of trying to innovate and bring new products to market. However, it’s no secret that movement manufacturing doesn’t come quickly or inexpensively, so to get things off the ground, the brunt of the FTS facility intellectual capital comes from its technology partner, Titan Co. If the name doesn’t immediately sound familiar, it probably should: Titan is India’s largest watchmaker (producing somewhere between 15 and 17 million watches a year), and a key player in the Tata Group, a massive Indian brand conglomerate with $100 billion in annual revenue. Brands like Jaguar, Land Rover, and Swiss watchmaker Favre Leuba are amongst the most notable international names in the Tata portfolio, which also includes the likes of over 100 other companies spanning food, pharmaceutical, and air travel industries. So the rebirth of American watchmaking rests on foreign technology? Yes. Sort of.

As a fully vertically integrated manufacturer with over 30 years developing its own watches (along with multiple lifestyle sub-brands in fragrance, apparel, and eyewear), Titan now makes its own movements, produces its own steel, has its own gold foundries, and owns scores of manufacturing and design patents — dozens of which belong to watch cases and movements, and are already being supplied for other brands around the watch world, including the Swiss. But even with that level of influence, outside of FTS, Titan currently has no retail or manufacturing presence in the U.S. for watches, so helping kickstart the infrastructure behind a movement manufacture in the United States feels like a win for both American industry and Titan’s own global watch-growth strategy. Make no mistake — though Titan is heavily involved in the backbone of the new Ameriquartz movements by providing engineering insight, physical tooling and manufacture, and the supply of some raw materials and hard parts, the most critical electronic parts of the movements, like the semiconductors, along with all assembly, QC, and after-sales support is being sourced from the U.S. and performed at the FTS facility under the watchful eye of Chief Technical Officer and head watchmaker Manuel Yazijian.